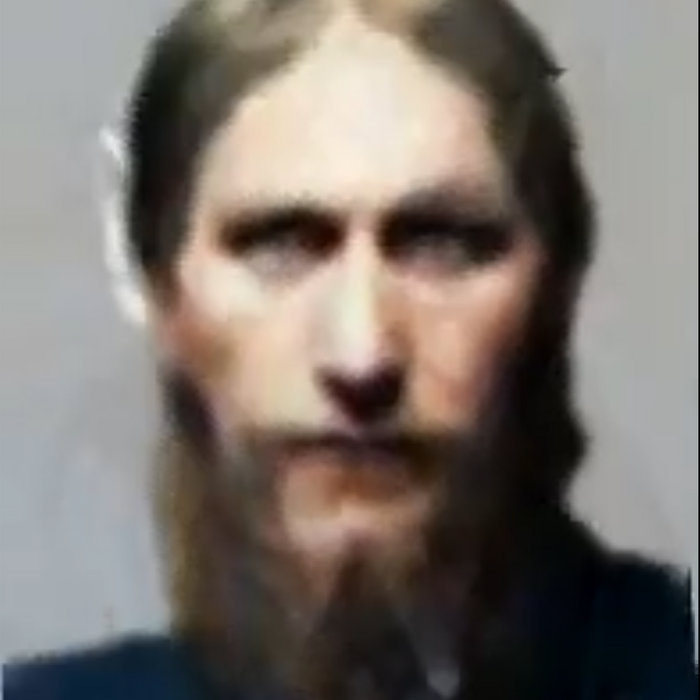 This mix is part of The National Cynical Network's upcoming program, 'Insane in the Ukraine'.

This album, like all of NCN's work, is freely available to anyone who wants it. You do not have to pay for it.

Copy what you want, use it as you wish.

The tracks from this album exist on our SoundCloud site as well and are freely downloadable (in lossless .flac format) and streamable free of charge at the following links:

Most of the source files that went into this mix's creation were 128kbps .mp3 format files, except the original Boney M. piece 'Rasputin' which was from a lossless source.

"Rasputin" is a 1978 song by Germany-based pop and Euro disco group Boney M. It is a song about Grigori Rasputin, a friend and advisor of Tsar Nicholas II of Russia during the early 20th century. The song describes Rasputin as a playboy, mystical healer, and political manipulator. The tells of Rasputin's rise to prominence in the court of Nicholas II, referencing Rasputin's appointment as Nicholas's son Alexei's personal healer.

The song claims that Rasputin was Nicholas's wife, the Tsarina Alexandra's paramour: "Ra Ra Rasputin, lover of the Russian queen, there was a cat that really was gone" and retells contemporary accounts of his powerful personality. The song depicts him as being extremely popular with the Russian elite and being sexually promiscuous.

The end of the song recounts a popular version of events that culminated in Rasputin's assassination on 16 December 1916 (O.S.). The song accurately states that the conspirators asked him "Come to visit us", and then recounts that Rasputin's assassins fatally shot him after he survived the poisoning of his wine.

AllMusic's journalist Donald A. Guarisco described it as "a tribute to the legendary Russian historical figure that uses balalaikas to create its textured rhythm guitar hook." Its melody has been compared to that of the traditional Turkish song "Kâtibim".

IDEAS and INSPIRATIONS which led to THIS MIX:

This mix was worked on, off and on, for quite at least a month, and developing versions of it have played on NCN's bi-weekly webcast. Certainly work was started on it WELL before the Ukrainian invasion. The mix, ultimately, became, to a large degree, about that invasion, and of course Putin.

The graphic 'album cover' used is a 'morph' between the actual faces of Gregori Rasputin and Vladimir Putin. There are certain parallels between the stories of these two men: When Putin's political 'star' first rose in Russia, his popularity actually outshone the head of state himself. From the aforementioned Wikipedia article about Rasputin: "The song claims that Rasputin's political power overshadowed that of the Tsar himself in 'all affairs of state', which was one of the main arguments of his contemporary rivals. Both have a reputation (some would say in Putin's case it is self-promoted) for hyper-masculinity. Both, certainly at the current time in world history, are widely said to be 'mad' and for much the same reasons. Also, the parallels between the Russian people's cries (as depicted in the bridge of the original Boney M. song) to 'do something about this outrageous man' and his later committed abuses of power, especially in light of current events, are un-deniable.

The term or prefix 'meta-' used in the mix's title (a term we have been using, provably, for many, many years, long before The Zuck glommed onto it) denotes that to a large degree this is a 'mix of mixes'. But it also contains covers and other variants of the song in question. Most variants herein, though, are mashups.

Nothing major was sacrificed (we substituted the original cut of the original song for the extended version, basically, which is probably how it should be anyway) for this but we wanted to make sure that the total running time for each track was UNDER 80 min. so that the mix (either version) would cleanly fit on a CD-R. It would be the thrill of my life to learn that 'bootleg copies' of this mix were being passed around Kiev, or *GASP* even Moscow and being played at underground raves.

The inspiration for this mix was that I just really really loved the original version of this song, in all of its grand ostentatiousness, which is great, and for some reason I always imagined that Vladimir Putin must have had this song, currently or at one point, as the ringtone on his phone. Just cuz.

I also really really enjoyed all the many and various remixes, versions, and especially MASHUPS of this song. Something about this song's construction and composition lends itself to an almost INFINITE MASHABILITY and I just really really wanted to showcase the best (IMHO) of these efforts in one contiguous ultimate mix.

NONE of the actual exact musical mashups (save for the 'political section') were done by NCN. We have only tried to put existing work together in a (we hope) very compelling, seamless and entertaining way. So, while almost none of the specific content in this mix is 'ours', the FORM of the mix most certainly IS, and is the result of much creative effort (and long nights).

We have noted some of the artists of these works in the description section below. After we have got this up, we will track down and credit all the artists and sources involved in this mix.

All of the source files used in this mix are from 128kbps mp3 format files EXCEPT for the instance of the ORIGINAL SONG 'Rasputin' by Boney M. which was taken from a lossless .flac format file of the song.

In each version (both the SFW and NSFW versions), the mix starts out with some very low-key covers including an acoustic piece (by AURORA) and a Medeival Renessaince version as well as a version played on a large old-fashioned pipe organ.

This segues into a remix section, and then, before we get into the mashups (ah, the FUN part), we hear the original version of the song.

In the very long and vibrant mashup section, we get a brief Lady Gaga set and this segues into a 1980s section for a while (there is a later reprise of the 1980s theme after the Rap/NSFW set, after which we hear the 2022 Mix of the song).

Eventually we get to the Rap section, starting off with an expurgated (I could not find an uncut version of this mashup) piece by Derry Tift. The entirety of the rest of the rap section is replete with N-bombs and a fantastic WAP version (created by Finn the Garbage Bin) and so these songs appear only in the NSFW version of the mix.

The difference between the SFW Radio Edit Version and the NSFW version (other than the Radio Edit is significantly shorter) is that major choppage and word-reversal has been done to the mashup for 'Shots With Rasputin - Boney M. vs. LMFAO feat. Lil Jon' done by the mashup artist 'oneboredjeu' whose Youtube video channel is here:

So much expurgation had to be done on this song (due to explicit lyrics by LMFAO and Lil Jon) that we almost decided to replace it with something entirely different, but still wanted to include a representation of this most excellent excellent mashup by oneboredjeu.

The other 'hot spot' in this mix, which we decided NOT to censor in the Radio Edit was in the mashup called 'Pretty Fly for Rasputin' which mashes up Rasputin with the Offspring song 'Pretty Fly for a White Guy'. The line is '...kick his lily ass' which we figured was pretty PG and NOT that egregious. We also didn't want to ruin the beautiful dropped-in sample moment Cummerbund created right after this line. However, because of this line, and some other lyrics in this mix which have 'adult themes' we recommend that if this mix is going to be played on terrestrial broadcast radio, it is probably best that it is played in 'safe harbor' hours.

Then we get down to business with the 'political section' of the mix. This is the meat, and has to do with Vladimir Putin, and starts with a humorous clip from The Onion (there is another quick humorous bit from Late Night's Seth Meyers a bit later) and then has something of the history of his personality and temperament from someone who used to live around and with Putin and how that temperament has changed as of late, and finally speculations (from the likes of Russian Grand Chess Master Garry Kasparov) on whether his latest action in Ukraine will finally leadd to his undoing and whether he has fallen into 'The Dictator Trap', which is explained.

In both versions of the mix, we save the best (IMHO) at least of the covers of this song, for the last, offering a heavy metal cover from Frog Leap studios by the inimitable Leo Moracchioli who always does the most consistently excellent work of this kind which we recommend and like very much.

It should be noted that, unsurprisingly, it has long been a widely held belief that Vladimir Putin is in fact the REINCARNATION of Grigori Rasputin. More information about this supernatural idea (FWIW) can be found here:

Will the stories of these two men END in a similar fashion?

Only TIME, and perhaps the Russian people themselves, hold the answer to that very question.

Until then... the world watches. And waits.