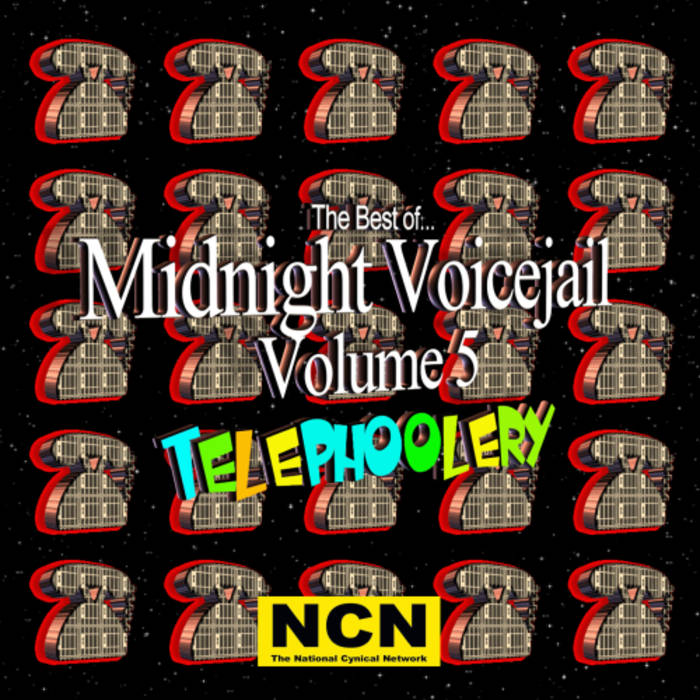 'Midnight Voicejail' is a critically-acclaimed psychedelic audio documentary which originally aired on KFJC. It follows the real-life exploits of Silicon Valley 'Voicejailers' as they communicate on, and take over, voice mailbox systems in the 1980's and 1990's. It is told chiefly through recordings of real voice mail messages, outgoing messages, and field recordings as well as some pieces in the same spirit, but made exclusively for this program.

This fifth volume, and one of the BEST of the 'Best of' collection, is about phone line and voice mailbox shenanigans such as phone phreaking and pranks.

Synopsis: The Bay Area Representative (BAR or 'Jim') announces that he will be kicked off the system. Various shenanigans ensue. Ronald Redball ('Bill') and Joe Sledgehammer compete with dueling outgoing messages (a contest titled 'Callbox Sunday') spoofing 'Back to the Future'. BAR's mailbox gets hacked into, as well as Mr. 1:15's. Ronald complains about and blames annoying punk-ass hackers on the system when he is accused of breaking into 1:15's mailbox. Ronald panics when he discovers Joe's mailbox is gone. Ronald assumes his mailbox is next to be deleted, and sends a group-message saying farewell to everyone on the system as well as, inadvertently, one to the system's owner, John R----. Ronald talks to Joe about his hi-jinks, live on the phone. Various voicejailers complain about their inability to leave Ronald a message because his mailbox is always full. The Bay Area Representative complains to Mr. 1:15 about Ronald not paying his voice mailbox bill on time. Ronald pretends to send an inflammatory Mr. 1:15 message, about 1:15's roommate, TO 1:15's roommate. Joe Sledgehammer trolls the partyline where he pretends to be calling from a radio station and giving away prizes. Callbox Sunday concludes, and Box Wars begin. A voicejailer berates other voicejailers about abusing the distribution feature on the system. BAR proclaims to Mr. 1:15 'what the hell' the friendship-ending conflicts will all blow over in time.

Some tracks of this program are enhanced remixes of material that appeared in the original series. See the comments for the individual tracks to see where they appear in the series and if/how they have been modified or remixed.

For Volume 1 go to:
www.cdbaby.com/cd/thencn

For Volume 2 go to:
www.cdbaby.com/cd/nationalcynicalnetwork

For Volume 3 go to:
www.cdbaby.com/cd/thenationalcynicalnetwor

For Volume 4 go to:
nationalcynical.bandcamp.com/album/the-best-of-midnight-voicejail-vol-4-fascinating

For Volume 6 go to:
nationalcynical.bandcamp.com/album/the-best-of-midnight-voicejail-vol-6-the-left-the-right

Disclaimer: All real-life 'voicemail' recordings are used with the express permission of the recording's owners, who have agreed to donate them to this project. All personal identifying information has been obscured, where appropriate. All derived material used herein is fragmented and/or transformed / re-contextualized, and/or remixed from its original form, and is used fairly as touchstones and references describing the cultural milieu in which the events depicted take place.