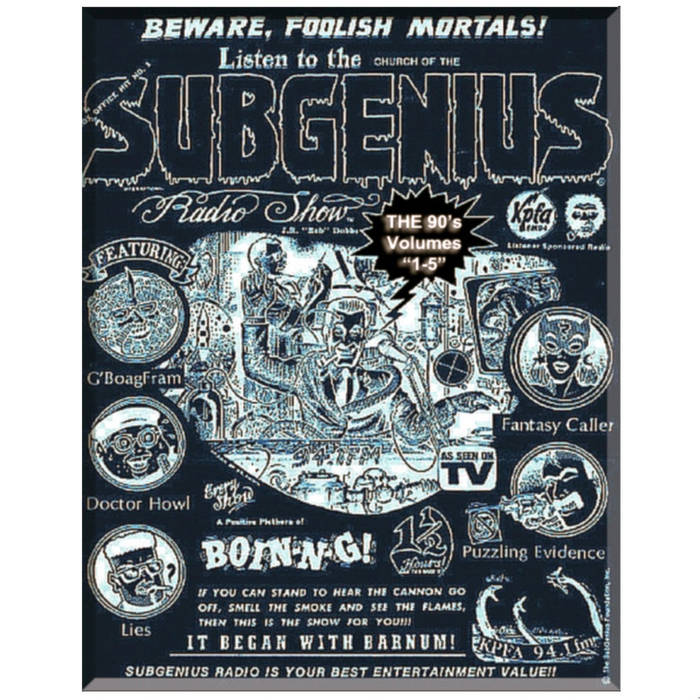 Don-O See my review of the 80's set of this series and just add the slightly updated 90's vibe. It's still all radio bulldada to me!

Note - The Second Volume of this 5+ hour set is a FREE DOWNLOAD. All volumes in this 5 volume set are available here for the first time and are around an hour long, each, and are free to stream. Any proceeds from paid downloads are considered donations to the NCN project and go back to support that project.

The 90s set is mostly material from the early 90's of what was called 'The Subgenius Show' or 'More Than an Hour Less Than a Show'. It features incredible collages mixed with extemporaneous trance spout-riffing, psychedelic bulldada and surreal improvised comedy. This set brings you rare audio of the 'Doktors of the Air' at the time, (Moebius Rex, Puzzling Evidence, LIES, Papa Joe Mama, and of course Dr. Hal) who (try to) explain X-Day, "Bob", Slack, the Subgenius Church, and their very strange radio show (aka 'The Show') which eventually became (some 20 years later) 'The Puzzling Evidence Show' (which is still on KPFA in Berkeley, CA). Callers include Phineas Narco, Frank Bent, 'Serious Business', various former U.S. 'Presidents', many others.

Listen to these specially preserved Narco-edits of the show, offering some of the most frenetic, breakneck, and weeeeird live mix barrage mix radio before, then, or since in the same vein as Frank Zappa and the Mothers of Invention, Firesign Theater, but with certainly it's own realm, sound and sensibility.

This is a companion piece to 'The Best of the 80's' 5 part series which is here: nationalcynical.bandcamp.com/album/the-best-of-the-subgenius-show-the-80s-volumes-1-5

For more information on The Subgenius Church please feel free to visit www.subgenius.com.

These 'Best of' programs were post-mixed and edited together by Phineas Narco of the National Cynical Network. Some portions were pre-edited by Puzzling Evidence.

See the attendant credits for a list of the original members and performers for 'The Show', a great comic effort which had a tremendous influence on The National Cynical Network (NCN) much later on.

Don't worry, it's just a show.

Edited and compiled by Phineas Narco with pre-mixing by Puzzling Evidence.

This program is meant to be listened to, and taken, as a whole work, artistic in nature.

Any proceeds from this work are considered donations to express appreciation for, and to help support, the expenses of the project this program is a part of, and the creative work behind it.

All the used material from the radio show "The Subgenius Show" used in this program is used with the express permission of the show's producer.