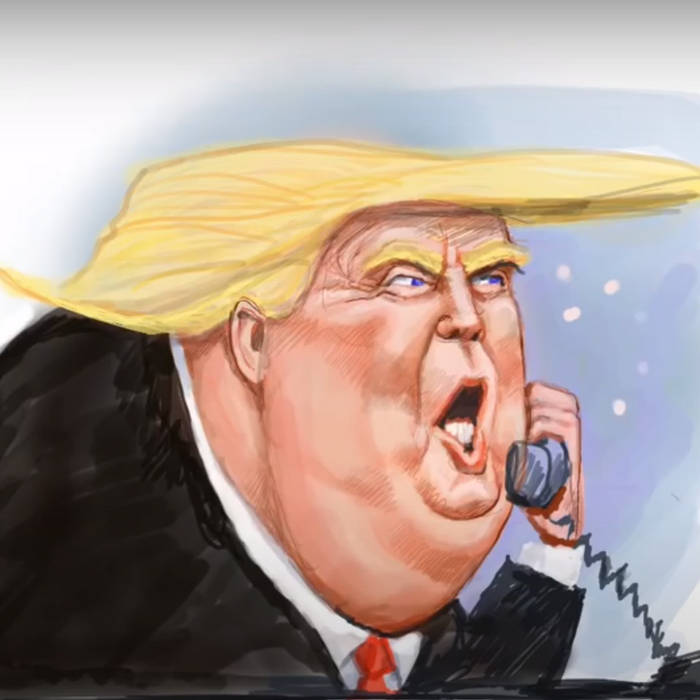 Since much of our country is suffering right now from 'Post-TrumpMatic Stress Disorder' (or at least that part of the country that actually has a fucking social conscience) we thought that we would offer up some 'laughter as medicine' healing to this whole thing so we are putting up a sequence from one of our programs that we have been meaning to put up for a while now.

This is a mix that we put together for our webcast marathon that was called 'Squattergate' which was a clever title that late night talk show host Jimmy Kimmel (or one of his show's writers) actually came up with. This webcast marathon was streamed on November 22nd, 2020 (otherwise known in The Church of The SubGenius sometimes as 'Kennedy's Brain Day') and was well attended and received.

Listeners to our webcast that night seemed particularly interested in hearing this particular sequence offered here, the connection count spiking sharply when it was announced that it would be played and staying elevated for its entire sequence, so we are guessing that they liked it.

The background for this is that shortly after the U.S. 2020 Presidential Election, which was won hands down by Joe Biden, it is well known that sitting President Trump's brain kind of short-circuited with the information that he had lost the election and as we all know, for whatever reason, he simply could not process or accept that information and it is probably true that that will always be the case.

As of the date of the posting of this recording to Bandcamp, the country is still kind of uhm dealing with our current President's psychological inability to deal with his loss, and we are sure everyone is familiar with how him and his followers' denial has since turned into delusion and has finally, in the past week, turned deadly as the nation now collectively, in horror, witnesses Trump's inexorable descent into madness.

Anyways, yeah, the whole thing has been this strange, strange mixture of utter hilarity and utter horror, and NCN has been busy artistically documenting it all, and expressing our feelings about it, since before Trump was even elected, back in 2016. Just because... that's what we do.

Who knows, maybe someday after the fall of our civilization, and after they get around to building a new one, they will have a Renaissance period when they are able to re-construct all the cool media shit put together NOW and programs such as the ones NCN puts together will be 'required listening' in some future educational course on Early 21st Century History.

Well, we can dream can't we?

But back to the history behind this audio program: In November of 2020, for a time, the Trump administration, in response to President Trump's denial was desperately trying to validate that denial and very much wanted to come with actual evidence for what he was claiming was true, that somehow, someone had committed voter fraud (to the tune of 7+ million votes no less) the night of the election and THAT was the reason for President Trump's loss and NOT the fact that Trump was actually unpopular and un-liked by most of the American populace.

So... they set up this hotline for people to call in and report ALL of the news of ALL of this evidence of massive, rampant, blatant voter fraud being committed coast-to-coast that they figured would come pouring in to their phone lines which they could then hand over to their legal team who would then use that evidence to challenge the election in court, and THENNNN... ta da! they would be able to overturn the election.

What happened was when they publicized the phone number, especially over the internet, the phone line actually got inundated by PRANK phone calls by callers all over the country who decided to have a bit of fun with these guys.

Some of the prank callers were actually professional comedians, but most were just regular folks. Many of the prank callers had the foresight to record their calls for posterity and post them online, and NCN, always having its ear to the ground for such DIY 'culture-jamming' type of activities, hunted these recordings down, downloaded them, and sorted through the recordings, selected the best ones, and created this MegaMix out of them that we offer up here.

We hope that you find it funny.

Keep in mind, that some of the language in this mix is rather salty and may be considered NSFW. It has some references that may be a bit obscure, that are references to 'Pizzagate' (look it up) and to Donald Trump's (supposedly) deceased serial child-rapist buddy Jeffrey Epstein that some people may find offensive (and which others may find hilarious).

This recording has some audio excerpts from the shows 'The Young Turks', 'The Daily Show with Trevor Noah' and 'Jimmy Kimmel Live' which are excerpts of hosts from those shows talking about the hotline and the pranksters who called it.

Many pranksters are in this collection, but two of them we would like to especially credit and acknowledge.

One of them is the professional improvisational comedian Anthony Atamanuik who is very talented and makes some of the best and most engaging calls in this collection, expertly and hilariously impersonating the likes of U.S. Presidents Ronald Reagan, Richard Nixon, Bill Clinton, and of course Trump himself.

If you want to find out more about Anthony's work, you can check out his youtube channel at:

The other one, who is in there just briefly actually at time stamp 36:00 in this program, is professional comedian J-L Cauvin, who does many impersonations of a political nature, but is probably best known for the one that he does of Trump which is actually something that goes beyond the realm of 'impersonation' or 'impression' and gets into the status of an actual working characterization or possibly even a 'channeling' of Trump.

A lot of comedians 'do' Trump, but Cauvin has Trump's voice, tone, cadence, timbre, and vocal idiosyncrasies so in hand, so down, that just listening to it, you actually think at first that you are in fact listening to Trump himself, until he says something completely comedically outrageous (I mean beyond the outrageousness of what Trump would actually say himself).

One has to say that on a sonic level, Cauvin actually gets into 'the uncanny valley'. And then the comedy and political satire that he is then able to get 'Trump' to say through that voice is just spot-on hilarious. His timing is just impeccable.

Needless to say, we really really enjoy Cauvin's work. This collection contains only a small example of it. If you would like to find out more about J-L Cauvin and what he does, you can check out his Youtube channel which is here:

When we excised this Prank Call Mix sequence from the Squattergate program, we discovered that it was just under 80 min. long so by accident it is just small enough to fit on a single cd-r if you wish to burn a hard copy of it.

This recording includes an abridged version of a collage, adapted by NCN, featuring Alex Jones and Trump which originally appeared in full form in our program 'Beyond Belief' which is available at Mixcloud here:

You don't need to pay anything for this work. If you want to name a price for a download, we appreciate you doing so. Doing so is considered to be a donation to our efforts and is applied to our expenses and work to keep us going and we thank you.

Feel free to join our mailing list here on Bandcamp. We plan to come out with a very massive release within the next week or so which will showcase the bulk of the best of our work, mostly of a political nature, from the year 2020, but also it will be about what has happened here in the U.S. (so far) during 2021 and it will complete our trilogy of such material the other two parts of which have been 'Death, Taxes and Empathy' and '2020 In Hindsight'. You will want to hear it.

If you value this programming and would like to see it continue, you may support the work and expense behind it by making a donation at nationalcynical.com/donate or by becoming a patron for as little as $1 per month at patreon.com/nationalcynical.

Thank you for your support.